Examples of impacts that cause damage and have a very difficult reversal:

Mining: The mining activity is the cause of several environmental impacts in Brazil. The small irregular mining can cause contamination, mainly by mercury, in the waters of rivers, lakes and also in the soil. Examples of areas that suffer from these problems in Brazil: Pará (extraction of bauxite, copper, manganese, gold and nickel), Minas Gerais (extraction of gold and manganese) and Goiás (extraction of nickel and copper).

Agriculture: Agriculture has caused significant environmental impacts in the cerrado, in the Pantanal and in the Amazon rainforest. Large green areas have been cleared for cattle raising and soy planting. These problems have damaged the ecosystems of these regions, in addition to reducing the green areas that should be preserved. Some climatologists claim that deforestation in the Amazon rainforest may be related to the decrease in rainfall in southeastern Brazil. Examples of areas that suffer from these problems in Brazil: Southern Amazonia, northern Pantanal Mato-grossense and northern cerrado.

Oil extraction: This activity is intense on the southeastern coast of Brazil. Accidents on oil platforms or oil tankers can cause serious damage to the environment, such as large-scale killing of fish, sea birds and other species of marine animals.

When disposed of improperly, certain types of waste that come from commercial and industrial establishments seep into the soil and can contaminate the land and groundwater that supply the river basins, polluting the environment and water that we consume on a daily basis. day. Nature is one of the main victims of inadequate waste disposal. Rivers, streams, streams, channels and ponds and all their ecosystems suffer from pollution caused by the accumulation and inappropriate disposal of waste.

Due to the awareness of society, there are ways to go against environmental damage. It is necessary to join forces to avoid them by having well-intentioned attitudes such as:

The conscious use of natural resources, the awareness of future generations about environmental preservation and the creation of laws that guarantee the preservation of the environment are the main measures to reduce the environmental impact. Like all the challenges we encounter, awareness must begin with the individual and one by one to leave for society. The world we live in is full of good things, we need to know how to take advantage of everything that is offered to us in a dignified way to create a balance between nature and human beings. Get Control of Packaging Logistics with my Residue

The packaging logistics that a waste transport company needs to carry out, in order to meet the demand of all customers, needs to be assertive and efficient. Packaging, such as drums, drums, garbage bins and containers for example, are items that are part of the company’s assets and the registration and control of these materials 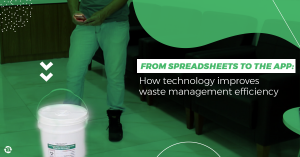 From spreadsheets to the app: how technology can improve waste management efficiency

Using spreadsheets in waste management in companies can have some advantages because it is an accessible tool, has a low cost and can be accessed offline. However, in the current world where information arrives extremely quickly and the need to be always up to date is paramount, the time to use spreadsheets in management is The importance of qualified suppliers

In waste management, generating and supplier companies must work in alignment in search of the best alternatives to manage waste 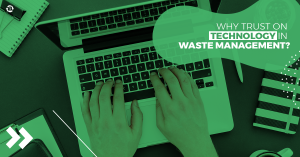 Why rely on technology in waste management?

As much as Excel has evolved over the years, it still maintains the basic premise of being a spreadsheet where any type of information arranged in rows and columns is accepted. Waste management is much more complex than that and involves a set of appropriate actions in the stages of collection, storage, transport, treatment, disposal

Phone in work from home period